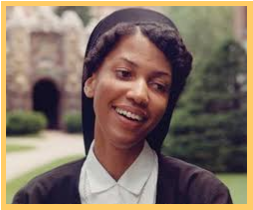 Early History: The granddaughter of slaves, Thea (originally named Bertha) was born in 1937 to physician Theon Edward Bowman and teacher Mary Esther Bowman in Yazoo City and raised in nearby Canton. Faced with inadequate public education, she transferred in 1949 to Canton’s Holy Child Jesus Catholic School, administered by the Franciscan Sisters of Perpetual Adoration. Bowman later recalled that only two dozen of the school’s 180 students were Catholic; the vast majority were Baptist, Methodists, and holiness.

Contribution: Bowman frequently wrote and spoke on the importance of pluralism and multiculturalism within the church, calling on church leaders to “abandon the Catholic ghetto mentality” that isolated the church from dialogue with other cultures and religions. In 1978 Bowman returned to Mississippi to care for her parents and to take a position with the Diocese of Jackson as director of the Office of Intercultural Awareness. She fought for the inclusion of “black expression” in Catholic preaching and liturgy.

Bowman assisted in the founding of the Institute of Black Catholic Studies at Xavier University in New Orleans in 1980 and served on its faculty through 1989. She aggressively campaigned for the incorporation of African American hymns into Catholic worship. Bowman noted that African American Catholics in the 1940s “had to leave behind us the music that was an expression of the spirituality of our home, community, and upbringing.” Vatican II increased the opportunity for expression of that heritage. In 1987 Bowman authored the introduction to Lead Me, Guide Me: The African American Catholic Hymnal. She wrote that African American hymns were “shared by black American Christians across time, geographic, socioeconomic, and denominational lines.” The following year, she recorded an album of African American spirituals, Sister Thea: Songs of My People.